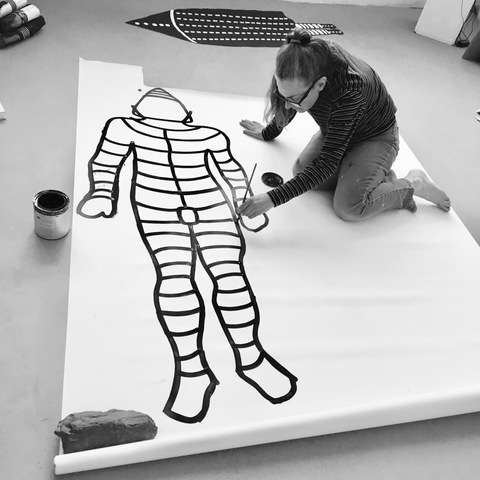 SELK'NAM PROJECT | in the studio
Photo by Enrique Rob Lunski [2017]

After a trip in 2005 to Ushuaia -known as the last city at the end of the world- situated in southern Patagonia in the Island of Tierra del Fuego [the land of fire], I felt compelled to and began a period of research into the lifestyle and spiritual-shamanic beliefs of the Selk'nam. They were one of the original native people from Argentina and Chile that lived there for thousands of years. Mostly due to a brutal genocide during the 20th century the full-blooded Selk'nam People are gone but not their culture/identity -they're alive thanks to the efforts of mixed-race descendants among other contemporary voices. The last pure blooded Selk'nam died around 1974. About four years ago, my own art came to reflect my fascination with the Selk'nam People. Considering that they had the most ancient way of living as hunter-gatherers, the Selk'nam were rich in rituals, had a remarkable set of principles, a profound sense of community, respect for the family and they revered nature, women power and re-using everything on earth. This current series is an investigation, study and visual homage to a bygone society whose values are so relevant today.
Loading...